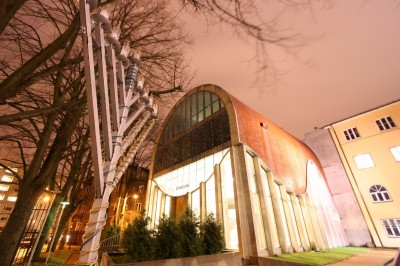 Jewish life without a synagogue… is not really Jewish ! After all, it is not only a matter of religious worship. A synagogue is also a meeting place, a place where you can communicate and exchange news. Even those Jews who regard themselves as completely secular people, visit the synagogue not only on holidays, but sometimes just like that! The new synagogue in Tallinn was built in 2007, designed by architects Kaur Stoor and Tõnis Kimmel. The building boasts its non-standard architecture that combines classical and modern styles. New synagogue “fits” into the ensemble of buildings of the Jewish Community and the Jewish School. It feels as though it was always there! And what were the previous synagogues like?

Before the German occupation, there was an active synagogue on Maakri street that was completely destroyed in the bombardment of Tallinn in March 1944. From that moment, only Jewish houses of worship existed in Tallinn. The last of them was located in a small one-story building on the street Magdaleena until year 2000. Then there was a synagogue on the second floor of our Community Center, after the Office of the Community moved to the third floor of the building. Spacious room with elegant design, the wall of Memory and a Torah scroll were a real joy for Community members for a long time.

But as time went on, this synagogue was replaced by the new one, surprisingly beautiful! Tallinn New Synagogue is the first synagogue in Estonia built after World War II (the previous was in the walls of another building, so it is considered that the current one is the first separately built). The building was erected with all modern safety requirements (including safety of visitors – at the entrance there is even a metal detector!), and it fits perfectly into the urban landscape.

The cornerstone of the modern synagogue was laid September 19, 2005, in presence of the President of Israel – Moshe Katzav, and the President of Estonia – Arnold Rüütel. Its construction cost two million U.S. dollars. The main sponsor of the Tallinn synagogue construction was Alexander Bronstein, local businessman, the son of famous Academician Mikhail Bronstein. At his request, the construction of Tallinn New Synagogue was dedicated to the blessed memory of his mother, Bella Barsky. The second largest contribution is from the George Rohr Family Foundation of the United States. Also, big donations were made by a number of Estonian companies and organizations, the City Government of Tallinn, the Estonian Ministry of Internal Affairs, and many individuals. On behalf of all Jews in Estonia, we express our deepest gratitude to them!

Inauguration of the new synagogue was held on 16 May 2007 in the presence of distinguished guests: the President of the Republic of Estonia Toomas Hendrik Ilves, Estonian Prime Minister Andrus Ansip, the representative of Shimon Peres, the Prime Minister of Israel, and Chief Ashkenazi Rabbi of Israel – Yona Metzger.

Hall of the synagogue, not counting the private balcony for women, holds 230 people. Also in the building of the synagogue there is a mikvah, a kosher restaurant and a shop of Jewish gift items. The Rabbi of the Tallinn Synagogue is Ephraim Shmuel Kot, Estonia’s chief Rabbi.