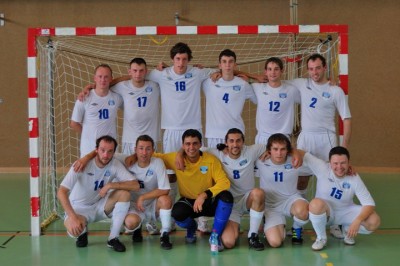 Many have heard this name, which embodies the competitive sports and fighting spirit of the Jewish people. The name derived from the famous Maccabean movement, headed by Yehuda Maccabi, which liberated the Jerusalem Temple. Sports club “Maccabi” was founded in 1920, when the Jewish people received cultural autonomy. One of the primary tasks of the autonomy was concern about the health of Jewish children.

The activity of the newly sports society was not limited to just promoting sports and physical culture among the Jews of the country. The club has given a stimulus to the development of certain kinds of sports that had been never practiced in Estonia. For example, women’s basketball in Estonia began with the Jewish women’s basketball team!

Until year 1940, the sports club “Maccabi” in Estonia has been very popular, and its members defended the honor of the Jewish people and the Estonian sport at international level.

Great strides have also been made in women’s gymnastics. Among hundreds of gymnasts who performed at the stadium on public holidays, the “Maccabi” athletes were always in the lead. The football team was also very powerful. 2-3 “Maccabi” members regularly played for the National Team of Estonia, which in those years participated in world championships.

A special place in the history of athletics in Estonia is reserved for the name of Sarah Teitelbaum, who became a record holder eight times! Her brother, Rubin Teitelbaum, set five records in weightlifting in Estonia, and in the year 1936 he took part in the II international Maccabiah Games in Tel Aviv, Israel, where he took gold.

A deep mark in Estonian motorsport was left by Savel Kletsky, who held leading positions in competitions in Tallinn and Riga in the period from 1932 to 1935. He was one of the founders of the famous ring road for motorcycle racing in Pirita.

In 1940, the “Maccabi”, like many other sports clubs of the country, was closed. Recreation of the club became possible only with the restoration of Estonian independence.

In 1991, the Estonian team participated in the European Maccabiah, which took place in the French Marseille, and won a silver medal in mini-football. At the European Maccabiah 2007 in Rome, the Estonian team won three gold medals. Simon Brenner (badminton, individual and pairs competitions) and Nadezhda Shein (tennis, paired competition) went on the podium.

With incredible success the Estonian national team participated at the opening of the Baltic Games “Maccabiah-2010” that took place in Trakai (Lithuania). The team won 12 medals!

Currently, in the Estonian “Maccabi” there is a tennis club, football team and a chess section. In the nearest future lies the establishment of a table tennis section and a basketball team.

The task of the “Maccabi” sports society is to attract to sports not only the young ones, but also older generation. Sport does not only bring a lot of positive emotions, but also helps the body stay young, and consciousness – sober!

Want to become a member of “Maccabi”? More information: http://maccabiee.wordpress.com/