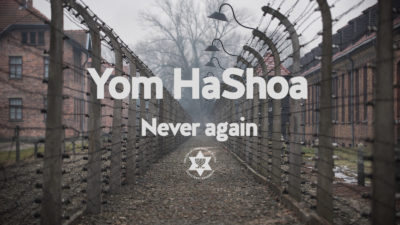 Yom Hazikaron laShoah ve-laG’vurah (יום הזיכרון לשואה ולגבורה; “Holocaust and Heroism Remembrance Day”), known colloquially in Israel and abroad as Yom HaShoah (יום השואה) and in English as Holocaust Remembrance Day, or Holocaust Day, is observed as Israel’s day of commemoration for the approximately six million Jews who perished in the Holocaust as a result of the actions carried out by Nazi Germany and its collaborators, and for the Jewish resistance in that period. In Israel, it is a national memorial day. The first official commemorations took place in 1951, and the observance of the day was anchored in a law passed by the Knesset in 1959. It is held on the 27th of Nisan (April/May), unless the 27th would be adjacent to the Jewish Sabbath, in which case the date is shifted by a day.