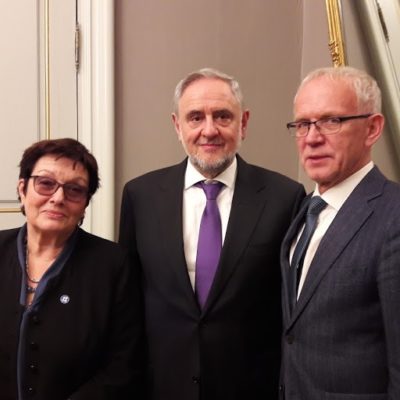 Robert Singer, Chief Executive Officer and Executive Vice President of the World Jewish Congress (WJC) has come to Estonia with a 2-day visit.

Yesterday, on the 23rd of November, Mr. Singer got acquainted with the life of the Community, discussed issues of security, international stability, relations between Estonia and Israel and the situation of Jews in Estonia.

Also yesterday, he had a meeting with Speaker of the Riigikogu (Parliament of Estonia) Eiki Nestor and a meeting with the head of the parliamentary group Estonia-Israel Igor Gräzin. As well, he met with the security police.

Today, on the 24th of November, Mr. Singer had a meeting with Secretary General of the Ministry of Interior Lauri Lugna.
He visited our Community Centre, Estonian Jewish Museum, Tallinn Jewish School, Synagogue and held Shabbat ceremony in the Jewish Kindergarten „Aviv“.