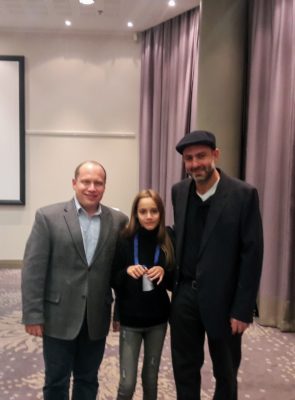 We would like to express our gratitude to the Ambassador of Israel Dov Segev-Steinberg for the nice reception. It was a pleasure and a privilege for the Jewish Community Leadership to take part in this event. Thanks for supporting the festival and for the opportunity to see new Israeli films. The Israeli film has won the Grand Prix of the festival last year, and this year the director of that film Eitan Anner became a member of the jury. We wish the victory to the Israeli films!
http://poff.ee/est/filmid/country=il

On this picture you can see Vadim Ryvlin, Executive Director of Jewish Community of Estonia with the main movie actors of the film ‘Driver’